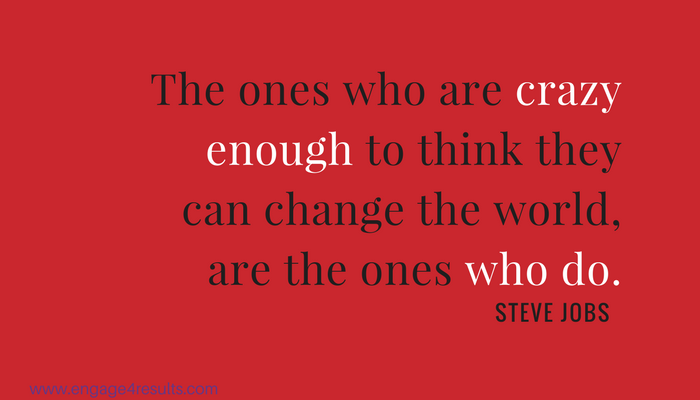 There’s a common assumption that we humans don’t like change.

If we don’t like or accept change we would still be running around in leopard skins hunting for dinner and wondering what this whole fire thing is about……sometimes not a bad thought to be back in that period!

The fact is we love change as long as it involves going forward in our eyes….a gain for us. If we sense some kind of loss we categorize the change as bad. The 2008 elections in the US were run by Obama on a platform of change. The highest optimism rating in American history for an incoming President is a reflection of the belief that things will change for the better.

In studies by Professor N. Nicholson “loss aversion” means humans avoid loss when threatened and are curious about change when they feel safe. Loss aversion can become a mind game.

In Robert Cialdini’s book “Influence” he describes a study related to loss aversion. Participants were asked to rate the desirability of cookies when given two or ten. Particularly interesting was the scenariou where a participant had cookies taken away after being given ten to start with. Before the participant could taste one he was interrupted by the researcher holding a jar of just two cookies. The researcher apologized for the mix-up, the participant was told that his jar of ten cookies were for another purpose. Given the sudden experience of loss these particular participants rated the desirability of the two cookies the highest of all tested participants.

How do you look at the cookie jar in tough times?

Will you evaluate your decisions based on an aversion for loss or will you frame it as an opportunity for gain?  People who unconsciously allow loss aversion to kick-in will resist change outright.

People who see the opportunity to gain will step up with a game plan based on growing the pie….

All our programs are tailored to meet your needs and have a "100% Money Back Guarantee" If you are not happy you receive full refund, no questions asked.